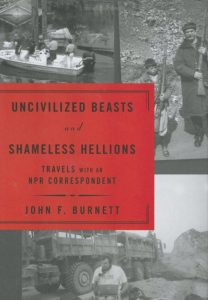 I’m friends with John Burnett and also contributed towards an upcoming on-air news story for which he interviewed me and others affected by the current divides in the US, specifically regarding COVID. That said, I feel no compulsion to overly praise or pull punches regarding the book he wrote in 2006 about his coverage of Hurricane Katrina, his times in Guatemala and Honduras during political unrest and issues of grave importance, life, death and suffering in Afghanistan, Pakistan, Waco, Texas and Mexico. It’s a rough read, which took me longer than usual as I took a break after each chapter to refocus on something positive; however, John offers a very important and distinct peek into the immeasurably nuanced problems and moral dilemmas that lie behind the large headlines and sound bites that often make up the entirety of a modern-day consumer’s attention span.

In short, this book is worth the effort. There are moments of levity, though brief, given the subject matter, but mainly a close observation of the human element surrounding tragedies, such as the Black men getting high on a rooftop of a flooded house while refusing to go with the uniformed police rescuers or the seemingly progressive fixer-interpreter in Pakistan who bonded with John for weeks, then revealed almost passively that he was supportive of honor killings for women that didn’t fall in line.

We read of a musician who plays beautiful songs using only a leaf between the fingers of his one remaining hand as he sits on the streets of Mexico City, then the aftermath of his “fame”. What it’s like to be a minister counseling, then walking a man to his death in a Huntsville, Texas state prison.

Some books are meant to entertain and some to enlighten. This one tends towards the latter, but for some of us who have encountered suffering and death on a regular basis and perhaps more so than we should to maintain a healthy sense of mental hygiene, John’s book is an affirmation that we who witness atrocities and tragedy are not alone. To that end, it’s okay to say to the world, “enough”, then perhaps go on a nice bike ride or paddle down a river.