Worldwide Waterways is an Official
1% For The Planet Organization

The epic route through the Northwest Passage.

Baffin Bay – the body of water/ocean that marks the eastern border of the Canadian Arctic Archipelago, through which the NWP traverses via various routes.

Pond Inlet (town and inlet) – easternmost town inside the Passage. Commercial airport where the team will fly in with all their kayaks and gear.

Bylot Island – across Pond Inlet from the town of Pond Inlet. Mountainous and a location of Sirmilik National Park, several glaciers located on the north side of the island in Lancaster Sound. 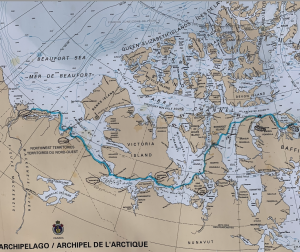 Brodeur Peninsula – paddling along the northern points of Brodeur Peninsula, we’ll encounter glaciers, super tall cliffs, steep canyon inlets and calmer conditions as we round the peninsula and enter along the eastern shores of Prince Regent Inlet. Several shoals and other shallow areas dot the coastline.

Prince Leopold Island and bird sanctuary – This is a phenomenal island with an other-worldly set of sheer cliffs that rise over 1000 feet above the water. Access can be gained via the southern part of the island which faces the larger Somerset Island. The isthmus between the large and small island is about 6.5 miles and a natural port can be found on the southern side of Prince Leopold island.

Somerset Island – the northeastern most point holds an abandoned Hudson Bay trading post at Port Leopold. There are shacks there, I believe. This is the closest point to Prince Leopold Island. We may travel south, along the eastern shores of. Prince Regent Inlet before crossing, in order to gain some protection from Baffin Bay; however, if conditions are good, it would be worth a crossing at the mouth of Prince Regent Inlet, in order to explore Prince Leopold Island and Port Leopold.

Prince Regent Inlet – the inlet gets wider the further south we travel, so we should cross from east to west soon after entering the inlet. This crossing is about 45-miles at the mouth and about 41-miles at its narrowest point. This will be the longest open-ocean crossing of the expedition. Once on the western shore of the inlet and paddling south, mountains rise tall and rivers become more common. Sheer limestone cliffs make up the northernmost sections, broken only by two canyons. This coastline is rife with historic significance, modern and ancient. In the early 1800’s, Captain Parry’s ship, The Fury, was forced ashore and abandoned at what is now Fury Beach. The ship, Prince Albert, spent two winters frozen at Batty Bay while searching for the lost Franklin expedition, here.

Fort Ross and Bellot Strait – Fort Ross is a famous crux place for Passage travelers. The lone cabin still remains and offers refuge and a place to take and leave a bottle for fellow travelers. The tides run through Bellot Strait at about 9 mph (8 knots) every four hours or so. The tides here are mysterious and often run counter to one another at great speeds, along the north and south sides. MAGPIE ROCK, should be of great concern and timing of the Bellot Strait passage should occur when there is slack water at Magpie Rock. Bellot Strait, from Fort Ross to Peel Sound is about 22-miles long. We need to hit it hard and get through it in a single hard push in order to avoid an on-coming tidal surge.

Peel Sound – heading south out of the western entrance to Bellot Strait towards King William Island. We’ll handrail the eastern coast of Peel Sound, which is more mountain ranges and some interesting rock formations first noted by the early explorers. Several coves offer protection in case of wind/weather. From the southern shore of Bellot Strait down to King William Island, we’ll start running into more polar bears and even more wildlife as we start this significant southerly course into the Passage.

When we approach King William Island, we can either head west towards Rae Strait or east through Victoria Strait. Rae Strait is named after John Rae, who discovered remnants of the Franklin Expedition, with signs of cannibalism. When he reported this to Lady Franklin and the authorities in England to claim the financial reward, he was vilified by Lady Franklin’s buddy, Charles Dickens in the press and to important politicos – resulting in Rae getting a smaller reward and being publicly ridiculed for suggesting an Englishman would ever resort to cannibalism. Rae’s reputation as an explorer has since been recognized/restored in the community.

Roald Amundsen was the first explorer to take Rae Strait through the Passage. Prior to his expedition, many (who had never been there) did not know King William Island was an island. They thought it was a peninsula. All previous nautical expeditions attempted to go through the most direct route, which is also the largest egress at the southern end of Peel Sound: Victoria Strait.

Victoria Strait, while a more direct route through the Passage, contains several islands and shoals, which trap drift ice that heads south through Peel Sound. The drift ice clogs the strait and backs up the works sometimes all the way to Bellot Strait and points north. Drift ice maps frequently show this blockage, with clear sailing south of Victoria Strait. This is why the route through the narrow Rae Strait, east of King William Island, is often clear when Victoria Strait is clogged.

Once navigation east and south of King William Island is accomplished, travel westward – traversing south of Victoria Strait on the northern boundary of Queen Maud Gulf, island hopping across to Victoria Island, the route usually remains clear and creates a natural demarcation between the more northern section of the Passage to the southern sections, which are clear of sea ice and drift ice for much longer periods than the north.

With luck, we’ll travel along the western shores of King William Island, instead of going towards Rae Strait. This will allow us to pass over/near the sunken wrecks of the Terror and the Erebus, Franklin’s two lost ships. The sites are off-limits; however, we are working on getting permission to perhaps dive or, at least, visit the sites. They are both in about 30’ of water near shore.

Whichever route we take, we will eventually cross Victoria Strait – island hoping to the very large Victoria Island. The mountains along the shore are not as tall as the cliffs and mountains we’ve encountered up to now; however, Victoria Island is home to the largest city in the Passage: Cambridge Bay.

Cambridge Bay has a significant commercial seaport and air service. Several oil and mining companies make this their center of operation, as do a large hunting/fishing guide industry and healthcare operations. What many visitors to Cambridge Bay notice; however, is probably the northernmost Kentucky Fried Chicken franchise.

From Cambridge Bay, we’ll stick to the northern coast of Coronation Gulf all the way to Lady Franklin Point. Along this coastline, we’ll pass Byron Bay, Ross Point and a handful of other small settlements primarily including landing strips, refueling depots and military defense early-warning stations, which were put in place during the cold war and are primarily obsolete now – though still in operation.

Once at Lady Franklin Point, we’ll island hop west-northwest across the channel, known for its wind, to the southern shore, then proceed westerly to Bernard Harbor – a small settlement.

The last few hundred miles of the journey the channel will become wider and we’ll have to make navigation decisions, as to cross some wide bays or to handrail the shoreline all the way inside the bays. Variables for the decisions will be based upon wind/weather conditions, our level of fatigue, sea ice (if any) and whether there are any features inside the respective bays worth the extra miles to visit.

The closure we come to the Beaufort Sea, at the Amundsen Gulf (which marks the official western boundary of the Northwest Passage), the more we’ll encounter open-ocean-like conditions and the effects of Arctic storms generated in the Beaufort Sea.

Several of the capes around which we have to navigate are infamous for their wild and windy conditions with no safe landing area. Timing will be essential to ensure safe passage and, based upon the reports from previous expeditions, we may have to spend several days awaiting the right conditions.

One feature of interest I want to visit are the Smoking Hills, along the east coast of Cape Bathurst. These coal deposits have been on fire since man first laid eyes on them. It may be too toxic to camp here; however, given the protected location we should be able to get in and out of the area in a manner of hours. https://en.wikipedia.org/wiki/Smoking_Hills

Our take-out/finish for the expedition is at the town of Tuktoyaktuk, just east of the mouth of the Mackenzie River delta. The warming of the Arctic caused a recent melting of permafrost, which is the road-base for the route between Tuk and the larger town of Inuvik – our point of departure back to Texas. If the road is impassable, we may have to kayak upriver to Inuvik, adding a few days onto our trip OR hire a guide boat to haul us to Inuvik.