There is a serial killer running amok in Austin, Texas!

At least there was in the 1890’s. It started with the brutal midnight murders of Black housekeepers by a killer using an ice-pick type of weapon and an ax picked up at the victims’ wood piles. The damage was grotesque and complete; however, the killer wasn’t finished. Over the next few years he grew bolder until eventually killing two white socialites within a few minutes of one another. The manhunt froze the Texas capital city in terror even as law enforcement officers and hired detectives sought clues. Eventually, the killings ended – just before very similar killings began in London, England by none other than Jack the Ripper. Some believe it was the same man. Others believe it was a copycat; but no one would ever be the same as the pot tipped from killings for a motive to killings being the motive. 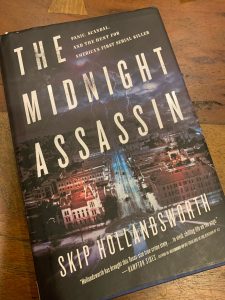 Skip Hollandsworth is a renowned Texas journalist and covers all the available bases while doing an amazing job of painting a very detailed picture of what life was like right before the turn of the last century in Texas. Spawned from his curiosity about the Moon Towers erected in the late 1890’s that still dot Austin’s skyline, the story of the Midnight Assassin will bring out the sleuth in you and have you double checking the locks on your front door.