The North Water by Ian McGuire 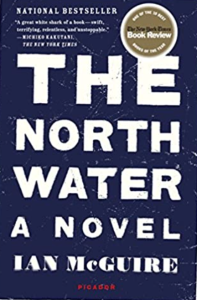 Aaron Reed recommended Ian McGuire’s novel “The North Water” to me, I suppose because our team of kayakers will be making our way through the Northwest Passage this summer and this story is of a whaling ship in the mid-1800’s wallowing in ice, murder, brutalism and intrigue along the eastern boundaries of the NWP, where we’ll be launching. The pinnacle action takes place at the mouth of Lancaster Sound and down into Pond Inlet, which is referred to as “Pond Bay” in the book. The story surrounds a war veteran surgeon who, to escape his court martial, hires on as a whaling ship’s doctor – a rather lowly position – in order to blend-in and get away from the shame encountered back in London. What follows is spates of vicious brutality, mutiny and skullduggery, from which the main character has to survive and come to grips with his own existential crisis.

The action is non-stop and the depths of inhumanity are quite horrible around each corner, as a psychotic crewman wreaks havoc upon anyone crossing his path. It’s only when at death’s door that the doctor is released from his self-imposed prison and learns the hardest lessons about how to deal with the world. I hear there’s a movie or series out about it, which I’ll hunt down. I recommend this book, but not for the faint of heart or timid.