Snow On The Roof Means There’s Fire In The Furnace

Jeff Wueste and I raced in the 34-mile Texas River Marathon yesterday. It’s the official preliminary race for the 260-mile Texas Water Safari and

the results determine your team’s starting position for the Texas Water Safari. While I’ve stared with my back to the wall a few times and ended up in the top ten, it’s nice to start out front in order to avoid the inevitable melee with the mass start in the confines of the small spring fed lake at the headwaters of the San Marcos River. 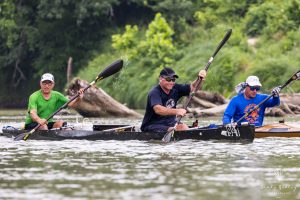 The Texas River Marathon also gives us all a look at our competition and where we stand against one another, somewhat. Mind you, the 34 miles is a mere sprint compared to the big dance, but still it’s nice to get an idea of what other teams are bringing to the table. The fastest boats, multi-racer canoes, bring their A-game and are pushing a lot harder than they will in the dance, but we all were doing so.

It was 1995 the last time Jeff and I raced tandem in the Safari. He was 35 and I was 33. We were 3rd place overall and winner of the Tandem Unlimited Class in about 42.5 hours.

The field has gotten a lot younger and faster i 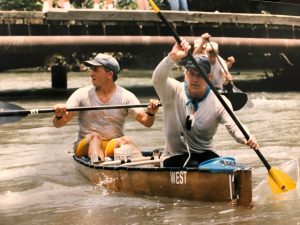 n the past 22 years and suffice it to say Jeff and I, now 63 and 60respectively, haven’t exactly gotten any faster. In fact, there’s evidence afoot that we may have actually slowed down a bit. Mind you, we haven’t b

At this point, you young Tesla commuters might want to Google “carburetor” and “governor”, but for a quick reference, simply understand that Jeff and I are naturally aspirated and our fuel flow is limited – thus is our speed. Not so much for our fuel-injected, turbocharged competition, as we once enjoyed the hair-blowing speed from our hotrod bodies as they do now.

We got a fairly clean start that lasted about 40 yards, when the river crammed down to 10 yards wide and all the big boats (see: not us) tried to thread that eye of the needle at at once and all at full-tilt boogie. While we didn’t get stern-hooked, several large boats around did, causing us to change direction several times from an optimal trajectory towards the finish line. After a quarter mile or so, the mess was cleared and we all starting jockeying for positions and working of drafting one another. A handful of solo boats hung on our wake, as we did with some of the big boats.

Now, everyone is a hero at the start of a canoe race, so it’s important not to blow yourself out. Given the governors we live with at this point in our racing careers, we needed no further reminders of our limits. So, we held our own, caught our breaths and settled into that all-to-familiar zonethat rides the line between aerobic an anaerobic glycolysis. After ten miles, we passed a few big boats and a few solos, but kept twosolos on our wakes – with only one ahead of us in the distance. We had our eyes on a three-person boat and perhaps one tandem. Two men’s tandem teams entered paddling surf-skis, which are far faster than our Spencer Strike, but not as comfortable and not at all conducive to swinging single-blade paddles, which we really need during the Safari. We switch between single and double-blades for speed and to give muscle groups a time to rest. 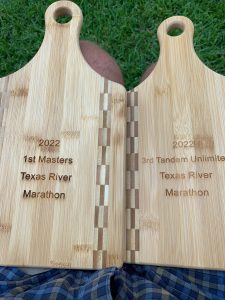 We eventually reeled in the soloist, dropped two more off our wake and kept one on our wake until the finished, which was fine. We gained and lost on a handful of occasions, trying to catch one of the tandem surfski’s and even made it within 4

0-yards of them within five miles of the finish; however, whenever they noticed us back there, they were able to take off – and our governors just wouldn’t give us any more steam.

As best we could, we held our own, cramping muscles and weariness abounded as we stayed steady until a final sprint 100 yards from the finish to keep the soloist in his place. We finished 2 minutes behind the tandem surfski, 7 minutes behind the 5-person boat, 11 minutes behind the 3-person boat, 17 minutes behind the Cowboys (6 man), 21 minutes behind the 5 man boat and 28 minutes behind the first tandem unlimited boat (also in a surfski). It was a hard race made even harder against a headwind, lost of shallows and a bit of heat, pushing 100 F. Our overall standing was 10th, which lands us on the 2nd row lining up for the Texas Water Safari. For our efforts, we achieved 3rd Tandem Unlimited and 1st Place Masters. “Masters” is any team composed entirely of racers 40 years or over, so we were racing against people young enough to be our children.

We feel pretty good about our effort and while we may not have the speed of our more youthful days, we’ve got some fire in the furnace that will get us to the finish line, no matter the storm.