I imagine I may be one of a thousand reviewers comparing Daniel Mason’s “The Winter Soldier” to E. Hemingway’s works, so I won’t linger on that aspect of the novel much – but there it is. Throw together the horrors of “the war to end all wars”, a couple of young, pa 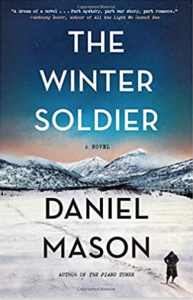 ssionate people trying to save lives near the front lines in eastern Europe, some secrets, a nun and a socially hesitant medical student and you have the formula for a great story. The details of the amputations and cruelty inflicted by stupid officers who don’t understand mental illnesses or the shock of war can be a bit difficult to read; however, none of the description are gratuitous. Lucius does his best to break away from the uselessness of his wealthy upbringing when the war breaks out and drops out of medical school to serve in a field hospital, simultaneously making his parents proud while escaping their high-society trappings. Far from the education he expected under the tutelage of a field doctor, he gets a much more abrupt education from a nun who is everything that he isn’t. Along the way, for the best of reasons he makes a huge mistake that leaves him with an overbearing remorse and unending nightmares. It is only years later, in his quest to find his one true love that he discovers the unpredictable results of his mistake.