After departing Austin, Texas, USA in my pickup truck with all our gear, food and kayaks for the expedition, we drove for three hard day across the country to Ottawa, Ontario, Canada, somehow getting across the border at the Thousand Islands north of Buffalo, NY with the shotgun AND without having to unload the overloaded truck for a deep cavity search. We were VERY ready to get out of that truck. Expedition Manager/Sister, Barbara and Assistant/Niece, Lauran, flew up and stayed in Ottawa for three days with us before departing after we sent all the above-mentioned gear to Pond Inlet. THEN, we were stuck in Ottawa for a week, all in the same airport hotel room for a solid week, which gave us an opportunity to see Ottawa, which is beautiful, visit with Sean Rowley and Derek Specht of the Adventure Paddling Podcast, AND start gelling as a team, which to my great pleasure, has gone really well. Turns out Rebekah is way cooler, understanding and insightful than Jeff and I could have ever hoped. 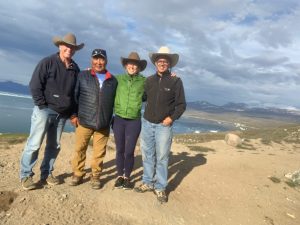 She’s going to blend into our stinky team milieu quite seamlessly and perhaps teach us a thing or two. THEN, we got notice that our gear/food/kayaks landed in Pond Inlet, yet we weren’t there to receive them, so they sat out on the gravel tarmac briefly until out local hero, Titus Allooloo came to the rescue and hauled the twelve tons of gear to the apartment he helped arrange for us through his friend, Diane. Finally, after much whiskey, NA beer, heavy food, poutine (try it at least once), walking, more whiskey, scooter riding and some great getting know us time, Rebekah was able to arrange for us to get to Pond Inlet. SO, we were down at the hotel entrance right at 6 a.m. only to see the driver depart after declaring we were late. 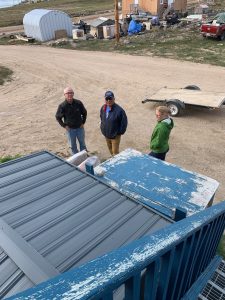 We waited another 30 minutes for the next shuttle and went through the rigamarole at the ticket counter, which resulted in a lot of strange looks towards my shotgun, our cowboy hats and the ticket counter agent not giving Rebekah a border pass for the last leg of our trip: “Just go. It’ll all workout.” Great flight attendant service on the first leg, which included warm chocolate chip cookies and cold milk (man, I love Canada), then at the layover in Iqaluit, Rebekah ran headlong into the, “It’ll all workout.” issue as she attempted to get her boarding pass, which wasn’t quite “working out”.

Her pleasantness and persistence paid off and all did, in fact, work out. We listened intently as some guy got really, really, really sick in the restroom next to our waiting bench, then finally crawled into a crop duster (okay, not quite) and zipped over Baffin Island from Iqaluit to Clyde River, where the pilot pretty much decided to slow down only after hitting the gravel. We gassed up the crop duster, then deftly flew the remaining leg to Pond Inlet where we were met by Titus, who showed us around town and who, it turns out, is a badass sea kayaker and whitewater guy, to boot! He’s in the club! So, tomorrow we meet with Parks Canada to get our permits, notify the RCMP of our intentions/route, test our satellite communications, pick up our DG (dangerous goods) from the airport and start packing our kayaks for a Wednesday launch. Tonight, we get to try to sleep for the first time where the sun doesn’t set.