With 21 days remaining before our team drives out of Texas for Ottawa, then a flight to the Arctic, things are tense. Frequently, I’m asked by a reporter or someone curious about our expeditions if I get rattled about the prospect of being hundreds of miles from civilization or rescue in some remote part of the planet. Such questions often jar me a bit, since I consider such excursions a welcome respite from our modern existence. Please don’t mistake my perspective as hubris, bravado or some John Muir type of zen-bonding with nature. I’m well aware of the risks and realize my abilities are based primarily in hard-headedness, rather than any exceptional athleticism or skill.

I haven’t adapted as well to modernity as most and am frustrated daily with the gray area between our prehistoric past and the civil utopian future many try to emulate or assume in what can be best be described as a strange mix of bureaucracy and righteousness in which we exist. In short, I’m looking forward to the break, to the respite, from this constant influx of discompassionate stimuli constantly bombarding us from an almost unavoidable set of electronic feeds.

W. Somerset Maugham penned, “The Razor’s Edge” in 1944 as more of a thinly veiled memoir when confronted with the same paradigm, though his catalyst was war, as opposed to an incessant barrage of facility. His central character, Larry Darrell sought refuge, too, in the world apart. I’ve never done well in an overly-stimulated environment. Even now, I can’t complete my work in our family’s office, just because of the normal sounds and chatter of the daily workings. For years, I’ve retreated to my mother’s kitchen table, in her house next door to the office, otherwise I can’t type a word or focus. My assigned desk in the office is merely a place to pic 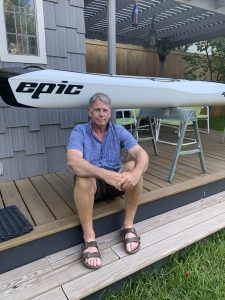 k up correspondence and to leave my files. It’s the same with my carpentry work, which I prefer to do in solitary.

All the funds for paying my bills while I’m gone for three months hinge upon four carpentry projects I’m working seven days a week to complete, against the Texas heat that breaks 100 F each day. It’s the same with another team member, as we get down to the wire. All the while I’m juggling logistics, team dynamics, sponsorship pleas and all other facets of what it takes to escape – back to the real world. Perhaps one of the most difficult tasks is to keep the influx of news at bay, to try to not necessarily ignore, but keep in the periphery the concepts coming down the pike, like our countries’ acquiescence to psychotic 18-year-olds’ unhindered ability to acquire firearms designed strictly for killing people while in the same breath relegating women to coat hanger abortions. It’s a difficult edge on which to travel, keeping the tragedy of both these realities at bay.

In the first lines of Moby Dick, Melville wrote,”Call me Ishmael. Some years ago – never mind how long precisely – having little or no money in my purse, and nothing particular to interest me on shore, I thought I would sail about a little and see the watery part of the world. It is a way I have of driving off the spleen, and regulating circulation. Whenever I find myself growing grim about the mouth; whenever it is a damp, drizzly November in my soul; whenever I find myself involuntarily pausing before coffin warehouses, and bringing up the rear of every funeral I meet; and especially whenever my hypos get such an upper hand of me, that it requires a strong moral principle to prevent me from deliberately stepping into the street, and methodologically knocking people’s hats off – then, I account it high time to get to sea as soon as I can. This is my substitute for pistol and ball… I quietly take to the ship. There is nothing surprising in this. If they but knew it, almost all men in their degree, some time or other, cherish very nearly the same feelings towards the ocean with me.”

So, I look for tiny specs of brightness, such as my new kayak. Yes, it’s somewhat inane and very trite, but I’m grasping at straw here. Cindy Amodio at Texas Surfskis and Kayaks gave me a great deal on this new Epic 18x, which has more volume and an over stern rudder, which the old style didn’t possess. Now, I can start rigging it for our upcoming expedition and with luck, I’ll return with my batteries recharged enough to make it for another period of time without knocking people’s hats off.