We can count on a novel by John Irving to contain wrestling, Maine, mother-issues, prep schools and morality issues du jour. With Jonathan Franzen, it’s going to be family issues. Messy, messy family issues with many detailed tangents, some relevant and some not so much. 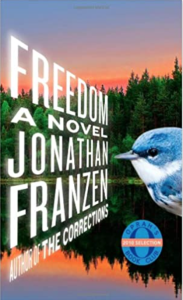 “Freedom” is the story of a husband, wife and their son and daughter – though the daughter doesn’t get near as much ink, because she’s the good one in the group. The story does veer outside of the family unit quite a bit and include some very relevant characters and they all experience life after pursuing and attaining the freedom (there it is) of seeing if the grass really is greener on the other side of their personal fences.

While his “family” theme extends from “The Corrections”, his last novel, Franzen excels at character development like no other. At times, his detailed descriptions of events and thoughts that form his characters’ personalities seems extremely tedious, but in the end this effort really does give the reader a whole look at the person and why they make some of their often horrible decisions, safe for the mom, Patty. Her, I just didn’t get some times. Her anger at her husband was incessant and mean, emanating from her issues with her own parents, seemingly.

The snipes she and her husband share often dive into the depths only witnessed between Burton and Taylor in “Who’s Afraid of Virginia Woolf”, a movie I have yet to finish after finding no redeeming qualities, nor entertainment and believe the overly-famous couple did very little actual acting, making it all the more disturbing. Still, the harsh words give weight to the light that we hope is eventually seen at the end of this dark tunnel.

If you liked “The Corrections”, you’ll love “Freedom” and if you want a lesson in character development, here it is.