For our last night in Pond Inlet, we were invited to d 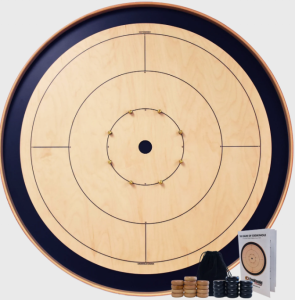 inner with Chris Mutch, a wildlife biologist in his 3rd year in Pond Inlet. He’s lived a few other places throughout Nunavut/NWT during his career and specializes in counting caribou noses and studying their habits and changes in their behaviors/biology across the territory. The evening was filled with laughter and an in depth, albeit too brief, education on the caribou, life in the arctic, mining concerns, politics and local gossip – which is always great. Chris was the consummate host, cooking us up a huge dinner of caribou, rice, salad and wine, with a charcuterie plate for hor d’ouvres of dry salami, pickles, chocolate and prosciutto. Man, it was nice to not only have a great meal and gracious host, but Chris also introduced the Arctic Cowboys to the fine game of. Crokinole, which he’s played since he was a child. We appreciated the warning before any money was laid on the table.

The game is akin to Texas shuffleboard, what with sliding some chunk of something across a wooden board sprinkled with fine sawdust and adult beverages, but that’s where the similarities end. The players must shoot their wooden buttons from their line, towards the hole in the middle, which is the highest score (25), with lower scores in sections around the board, like a dart board. Thing is, you’ve got to hit an opponents button (they call it a rock) on your way to scoring, or your button is disqualified and sent to hell with no score.

Taking turns around the board, clockwise, the play goes on until each player has used their six buttons/rocks up. Then the points from the buttons remaining on the board are added up and that’s the winner, or winners – since we were on team. Fortunately for Chris, he and I were teamed up and we knocked the lights out of Jeff and Rebekah’s efforts. In your face, Crokinole Losers!

Rebekah is a self-reported non-dog person; however, during our stay in Pond Inlet she almost became the new owner of a fluffy puppy and became best-friends with Chris’ dog, Farley, who is named after Farley Mowat, author of “Never Cry Wolf” – which is a great movie, as well.

Thanks, so much Chris for a wonderful last supper for the team before we head out. Tonight, we motor out to Point Graham Moore/Button Point, which Jeff renamed Muffin Point, where we’ll get a bit of rest before officially launching the expedition tomorrow, Tuesday, August 2, 2022.