You’ll Shoot Your Eye Out, Kid!

You’ll Shoot Your Eye Out, Kid! (aka: You’re Going to Die)

Prior to and during my expeditions there’s always a small handful of people that predict that I’ll be killed or that I’ll get someone killed. This is usually due to some form of belief that indicates that I don’t know what I’m doing about xy and/or z when going into some dangerous area or encountering someone or something dangerous, for which I’m either wholly unprepared or just plain stupid.

A subset of this group of critics usually includes details that support their claim that includes their knowledge of some aspect of the event or a friend of theirs that has some knowledge or skill that I obviously don’t possess. For the Amazon, it was my lack of white-water kayaking skills.

I spent the first few years of my paddling pastime as a white-water kayaker, but without much experience in heavy duty water bent on killing me, so there was a smidgeon of truth in some of the naysayer’s quiver. For that expedition, what the soothsayers downplayed or ignored was my own insight into what I lacked in white-water skills, for which I compensated by surrounding myself with five of the most experienced white-water paddlers on the planet, who watched me like a hawk and whose every direction I followed to a “t” as we successfully navigated 500 miles down the fairly uncharted Mantaro River. I rafted and kayaked Class V rapids and we all portaged the most dangerous situations, as all responsible river runners do. 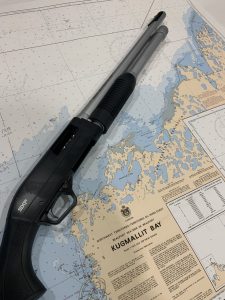 Other categories for the foul-fortune tellers included encounters with narco-traffickers, wildlife, pirates, disease, etc… There was no lack of fodder for my impending doom, and I’m happy to report the predictions failed to hit their mark on every point.

The same holds true for our upcoming Northwest Passage expedition. Thus far, the primary focus for the doomsayers seems to be our choice of firearms, ammunition and how to prevent or handle meet-and-greets with polar bears. As with all my forays into areas incredibly remote and fairly unknown by common standards, I’ve spent a considerable amount of time researching all aspects and communicating with people who’ve been-there-done-than and/or who actually live all their lives in the areas. These are a group of people I refer to as experts, when it comes to actually knowing what they are talking about through actually experiencing the area and, specifically, polar bear encounters.

Through my research and communications with people who deal regularly with polar bears in the arctic and the NWP, I narrowed down our choice of firearm for the expedition. Criteria included what was legal to carry in Canada, what we could carry on a kayak expedition, what was effective at deterring a polar bear during an attack, polar bear behavior, what firearm operated reliably in the climate and, mainly, what the locals actually use.

Once that was established, I set out to find an affordable 12-gauge stainless steel pump shotgun with an 18” barrel. Turns out, they’re pretty hard to come by right now, so I put out a notice on Facebook to see if anyone could help me find one. Knowing how the masses respond on FB, I was extremely specific in my description AND in what I wasn’t asking for, which included advice on what other firearm I should take and links for the specific gun for which I was searching. You see, I knew exactly what I wanted and could not find it on the internet or in gun shops, so I was asking if anyone knew of a place or person that actually had the gun for sale.

What I got, of course, were links to place where the gun was advertised for sale (but out of stock), suggestions of what alternative guns I should take, advice on how to properly kill a polar bear, reasons why my choice of gun was wrong and predictions of my obvious upcoming demise. Not one response on the lengthy thread included anything near “Hey, I’ve got that gun and will sell it to you.”

I suppose it’s a kind of christening prior to each expedition, to have my stupidity pointed out and my impending doom predicted. Now that it has been properly logged, I guess I’m ready to go.

A standard by which I judge my actions and plans with regards to expeditions comes from the comments made by people who have done what I’m about to do, or at least been-there or done something similar. Anyone not falling into that category are just grackles on a telephone wire.

What those grackles don’t realize is that those of us who explore those faraway places are some of the most cautious people on the planet. We are not a bunch of adrenalin-junkie risk-takers. The seconds spent by those grackles to post a comment pale in comparison to the years spent researching every possible aspect of this expedition. I guess this is what it feels like to spend a lifetime researching a virus, then have some shock-jock mouth-foaming podcaster insult your findings and recommend gummy bears for the cure.

So, we’ll soon be off to a land so wild and savage and upon our return, as usual, I’m sure we’ll be met by some pretty silent grackles.