Mapmaker, Mapmaker Make Me A Map…

Apologies to Joseph Stein, but I am one of those who simply loves maps. I have a handful from the early 1800’s when the Amazon regions were being explored. Right now I spend a lot of time poring over detailed navigation charts of the Northwest Passage in preparation for our kayak expedition this summer. I make notes of significant geographic features, distances and potential “opportunities 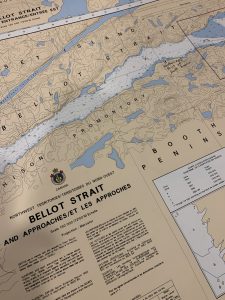 for growth” which seem inherent with far-off expeditions.

By the time I’m on the expedition, I want a good general knowledge of what to expect and where we are in the grand scheme of things, based upon my map study. Along with GPS, electronic mapping, guidebooks and the actual paper charts, our team is in daily contact with our management team, who relays weather and sea ice conditions, so we can plan the best route possible for the coming day.

I also love maps for the historic context. While on the Amazon River, I reveled at camping in the exact same places as famous explorers and noteworthy historic figures, such as Che Guevara. So, while in the arctic, I’m really looking forward to experiencing the same exact places where historic expeditions over-wintered, explored and oftentimes, sank after being crushed by rocks or ice. Taking the same route is thrilling enough, with the little that has changed in the Northwest Passage in the past few hundred years.

That constant may not last, of course. When the sea ice becomes even more scarce, the Passage will be an autobahn of large container ships and supertankers, shooting the shortest courses between Europe and Asia.

But, for one brief moment this summer, it will be ours to admire.